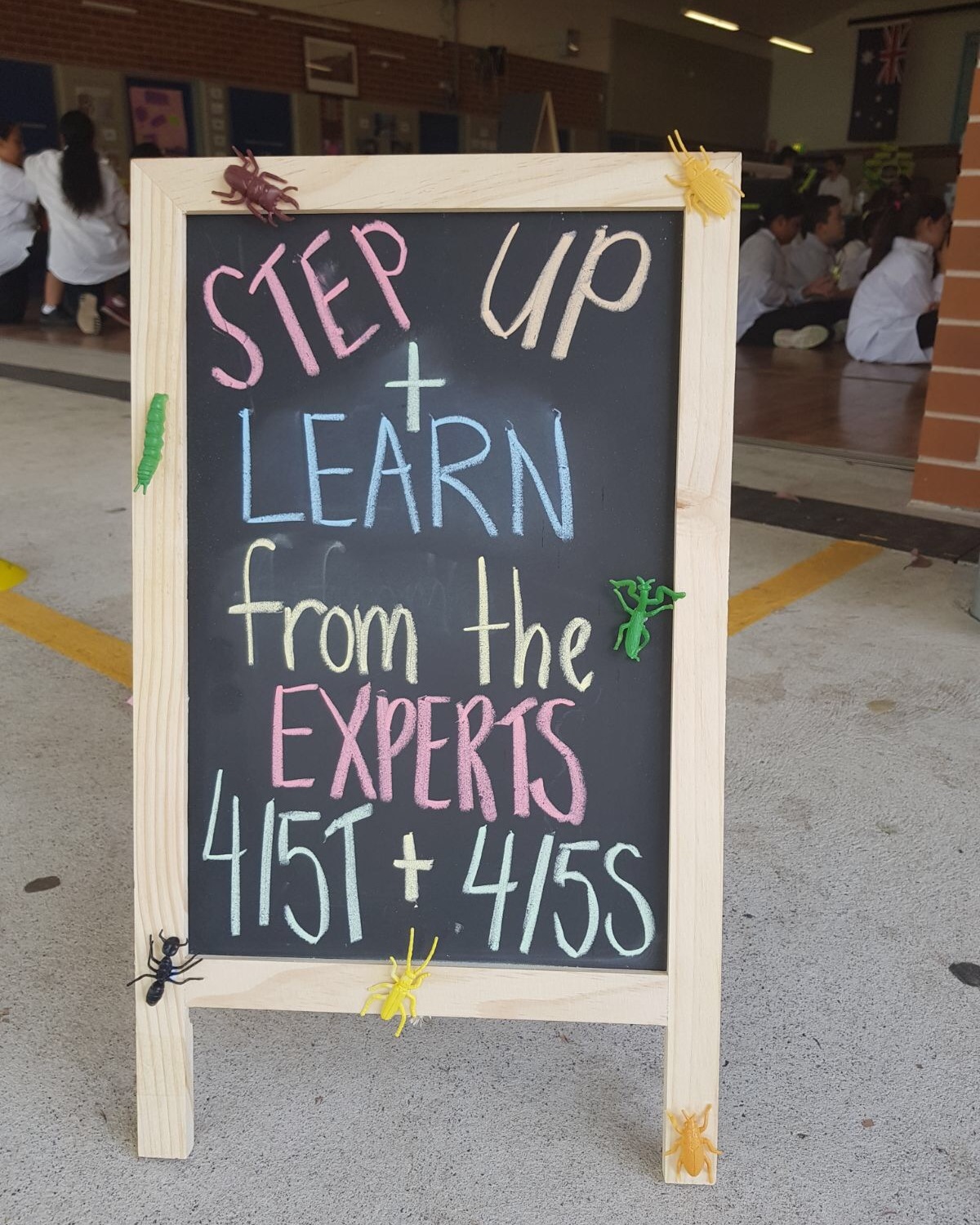 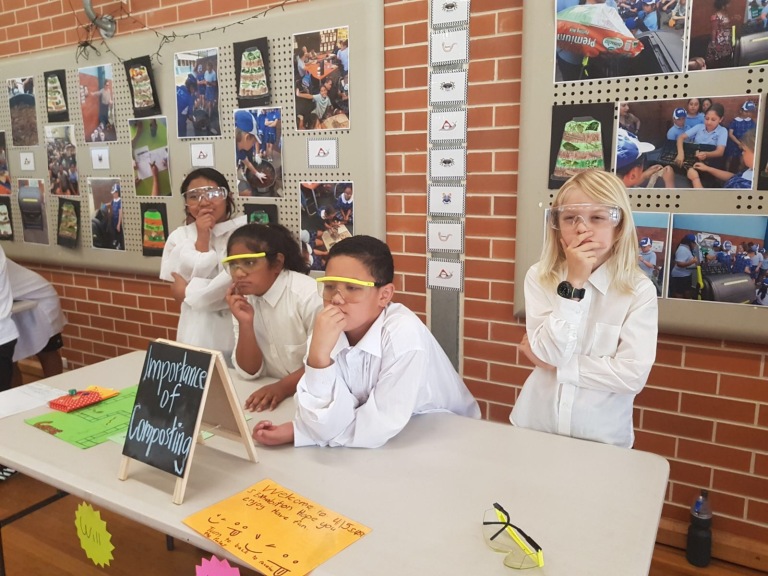 This past week has had an air of finality to it- but is it really the end? The students of Lina Taweil and Sherlyn Shankar’s Cross Stage 2 and 3 classes staged their Science Expo on the Tuesday afternoon, which was the culmination of their current learning. They taught the rest of Stage 2 and 3, as well as parents, grandparents and visitors from local High Schools all they knew about ‘Composting’, using the explicitly taught vocabulary they had learnt over the previous eight weeks.  Then on Wednesday, Sherlyn, Lina and I attended the EAL/D network meeting to learn more about integrating vocabulary into everyday practice from Paul Dufficy (@CHEAPedagogy) and listen to Cindy Valdez-Adams’ (@TESOLoz) reflections. We also had the opportunity to see how the other six groups of teachers had attacked their vocabulary action research projects. After overcoming the shock of seeing 130 attendees, Lina and I also presented our project to this combined EAL/D Connect and Refugee Network meeting and here it is.

The following information is from the Power Point presentation that Lina and I put together for our presentation. 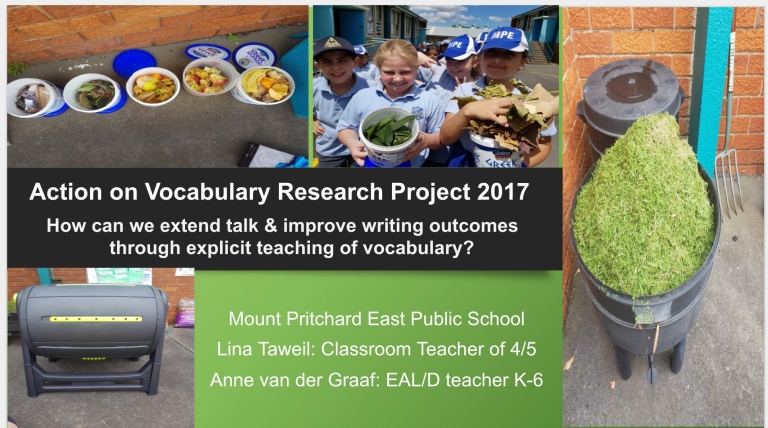 4/5T has three students who are newly arrived to Australia. They came at different times throughout the year. One, who originally came from Syria, has a refugee background. He speaks Arabic and Armenian. Another came from Chile near the end of Term 1. He is literate in Spanish. The third came from Samoa via New Zealand. She had learnt a little bit of English in New Zealand in the term she spent at school there. All of them have enjoyed this project because they have learnt the tier three vocabulary at the same time as the other students and have enjoyed rolling words like, biodegradable and non-biodegradable, around their tongues. Our student from Syria has become something of a naturalist. He has been collecting primary consumers like snails and throwing them in our compost bin at every opportunity.

By the end of this project every single student in 4/5T and 4/5S could explain what compost is, the process of composting and its value. 4/5S was not officially part of the vocabulary project, but they were benefitting from what we were learning and their teacher Sherlyn Shankar was applying the same pedagogical practices.

The teachers of the two classes chose Composting to fit in with the area of Science called, ‘Changing States of Matter’. They made up their own lessons with help from resources that they found on the web. Some of the resources included rich texts about sustainability plus articles and videos found on the internet. The videos were a valuable source of vocabulary and information. The students were engaged with the learning and all responded positively to the visual accompaniment to the information.

Before we began the project, we chose the tier 2 and tier 3 words that we felt were important for discussing the topic. These lists were added to as more information was discovered and needed to be expressed. We aimed at teaching six to seven new words each week and reinforcing them with games and activities at set times each day.

Before the project began I pretested every student in the class on the chosen words. Below are the results. By the end of the project they all could recognise these words, and read nearly all of them. They could explain most of them and knew the meaning of prefixes like macro, micro and non.

Out of the three newly arrived students, only my Spanish speaker could decode most of the words but he could not tell me the meanings. He benefited the most from having the translations of the words written down. 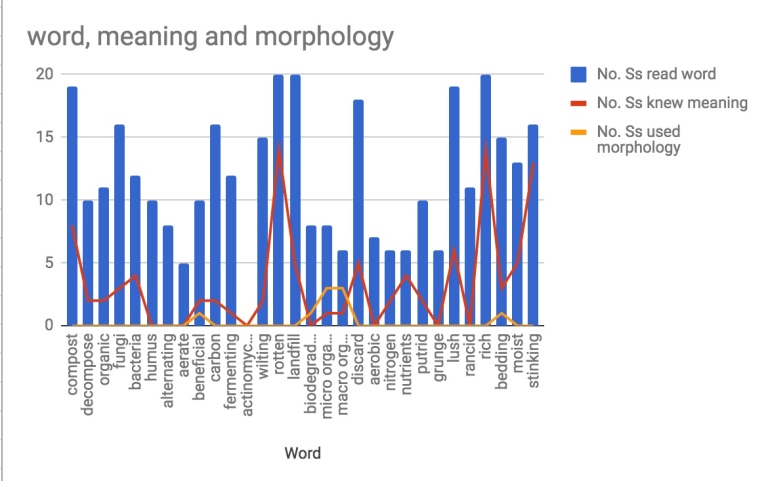 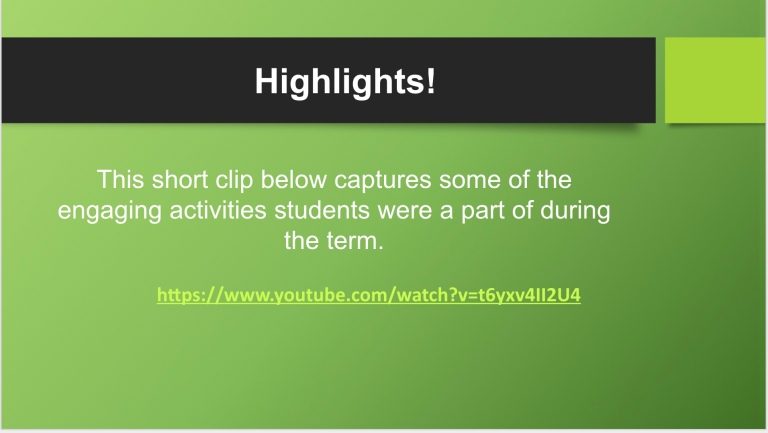 The link above shows a Youtube clip of the students working with the words to front load their meanings. Front loading allows them to not only be able to read and recognise the vocabulary but also to be able to explain the meanings and use the words with confidence.

The above slide is fairly self explanatory. The student engagement was extremely high as the games and hands-on activities led to substantive conversations and high interest. Who would have thought that composting and vermi-composting (worm farming) would be so interesting? 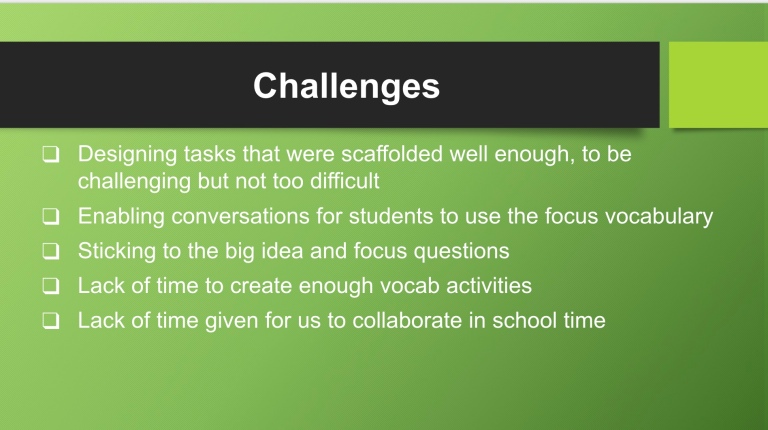 It was challenging to cater for the needs of a class of such varying and diverse language needs. The games and hands-on activities were valuable. Cindy and Paul asked probing questions to help Lina and me to reflect and to focus our thinking as well as to be more explicit about how and what the students were to learn. Once it was decided that the rich end task was going to be a Science Expo we were able to narrow the writing down to a Procedural Recount with an investigative question that the students could hypothesise about. This also involved an explanation at the end as a conclusion, as to whether this hypothesis was correct, and why.

We were very glad of the guidance that we received from Put it in Writing by Joanne Rossbridge – PETAA publication This helped us to decide on the type of text and to know how to approach teaching its components.

Time was our biggest challenge. We needed more time to spend together to think, plan  and work out how to scaffold our lessons. There was no point in making games and teaching aids that did not support the exact aims of the lesson being taught. Sometimes I had to second guess where the lesson was heading in order to make and bring the right resources for my EAL/D students.

It was interesting that when I did make visuals to scaffold the activities and games for the high support EAL/D students, that the other students would come and have a peek. Most of the students benefitted from the extra little bit of help to help clarify the meanings of the words. 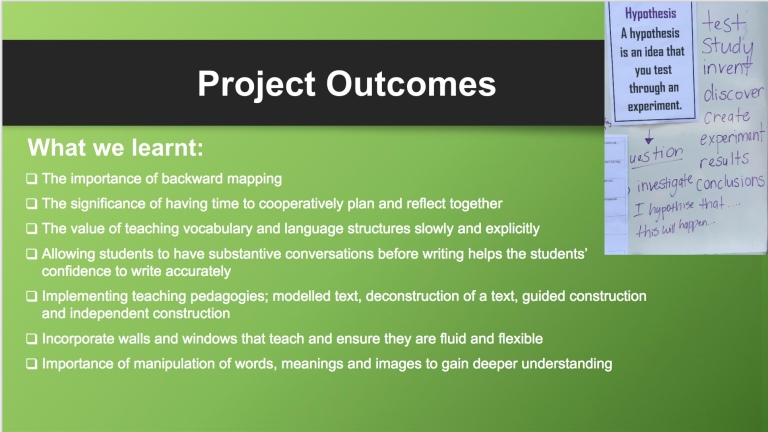 Our main ‘take away’ from this project is that, as teachers, it is not enough to just expose the students to the vocabulary that you wish them to learn. Tier 2 and 3 vocabulary has to be explicitly taught, used, recycled and played with until the students can claim it as their own. 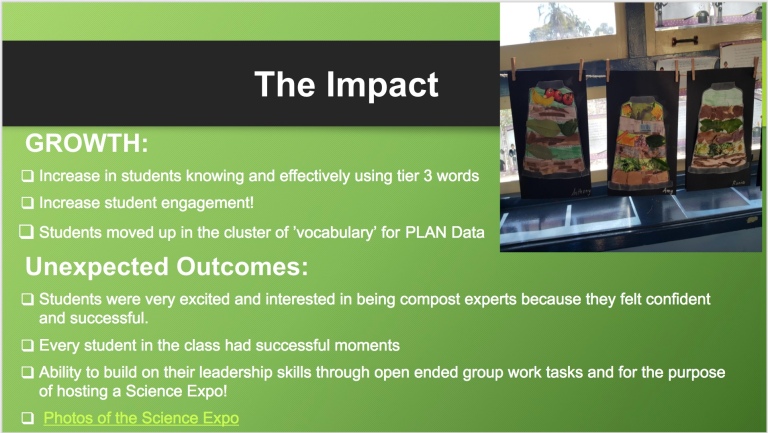 Photos of the Science Expo about Composting

Watching all the students of 4/5T and 4/5S proudly teaching others about the various aspects of composting on Tuesday last week was the highlight of my year. As you look at these students dressed up as scientists in white lab coats and safety glasses, and you see the looks of pride and achievement on their faces, you must agree that this project will have an impact on these students’ lives for a very long time to come. Lina, Sherlyn and I have learnt lessons that we will take to our next groups of students. Is there really an end to a project like this? I don’t think so. It’s just the beginning.