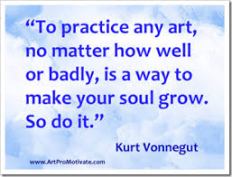 On Wednesday of this week Melanie Rios (@melmollyrios) and I were privileged attend our first meeting with 84 other EAL/D teachers from the Liverpool and Fairfield districts from south west Sydney, at Fairfield Public School (@FPS1895). It was wonderful to learn from Paul Dufficy (@CHEAPedagogy) but just as wonderful to hear how Saroj Sami and Cindy Valdez-Adams(@TESOLoz) were using Drama and Visual Art to help refugee students and new arrivals to learn the English language. They were talking about using ‘walls that teach’, quality texts and deepening understanding through discussions. In an amazing film that several of Saroj’s refugee students put together about bullying for a national competition, you could see that discussions had led to a deep understanding of the message they were sending.

Cindy’s work this year is with new arrivals. Before she developed her program to be Visual Arts based, the students were reluctant to be withdrawn from class. Now, by using Art to engage these students as well as to foster creativity and develop their vocabulary, Cindy finds that they have a sense of belonging and that they value the program. She finds that the students feel that they are on a level playing field and do not feel intimidated by their lack of vocabulary, or inability to read and write in English. Art is a language that helps them to make connections as it is displayed where all the school can see. Art helps to make thinking more visible.

Below is some artwork that her students created that involved talking about family members as well as 2D and 3D shapes. 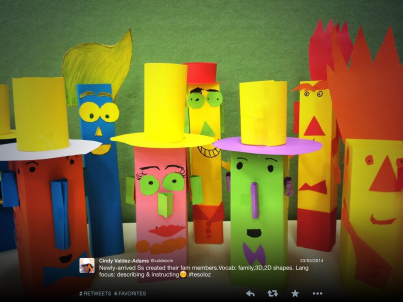 The 2013 draft copy of the Australian Curriculum for the Arts says – ‘The Arts have the capacity to engage, inspire and enrich all students, exciting the imagination and encouraging them to reach their creative and expressive potential’. I think that the work being done by these two amazing EAL/D teachers shows this to be true.

This year my most encouraging lessons have been with a Stage 3 class because I am actually programming the lessons instead of taking other people’s programs and differentiating them for my EAL/D students and most exciting for me – It is an Arts program! 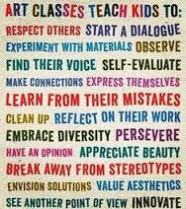 This term the students have explored the stories and art techniques of a culture of their choice. We began by showing them various artworks from around the world. The students voted for their preferred art form and from these preferences we formed three groups. One group chose to make rain sticks from South America, another group made clay pots and the final group depicted Chinese dragons. I went onto Pinterest and found several websites that the students could access to give them inspiration and some idea of how to go about creating their artworks. 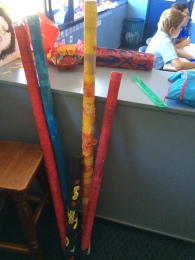 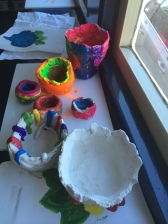 Our class assessment criteria included: The students’ ability to work co-operatively and collaboratively, their willingness to experiment and take initiative, whether or not they were willing to teach others or be taught by others, how creative and resourceful they were and finally their level of engagement. I also encouraged them to reflect on what they were learning in the process on the class blog.

It was exciting to see things like the entries on the blog (seen below) from formerly disengaged students –  not just because of these lessons but because of 21st century learning taking place in their classroom by the classroom teacher, Tareena Eastwood. (@TareenaEastwood) 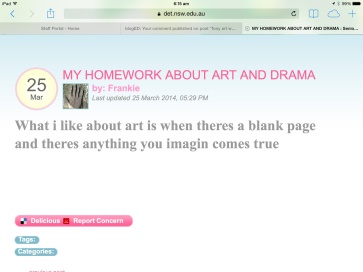 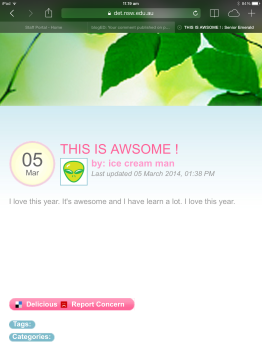 After four weeks doing Art and learning from their mistakes and each other. The students read stories that involved their clay pots, Chinese dragons or rain sticks. From these stories that we all found, the students wrote dramas, created story boards and filmed their acting and animations that they created. Next week we will watch the finished products and I will ask the students to self-assess and peer assess the videos based on how clearly the message or story was conveyed, as well as how engaging and entertaining it was.

I am thrilled with the way these students of mixed abilities and interests have engaged  with each other and the tasks they have chosen to undertake. It has been interesting to watch them rush in, make mistakes, talk to other students and learn from each other. It has been rewarding to hear them say that they don’t want the lesson to end and that they want to keep going. They have proven to me and to themselves that they can definitely learn better by watching, listening  and talking to each other despite their English language limitations. How has this been helped to come about? Mainly because of the universal language of the Arts.